I've been making a fun app for personal enjoyment recently. I started with Python because it's easy to experiment with and it has a very nice and convenient standard library.

However, unless you are using numpy or some other C based package, Python's performance for cpu based workloads tends to be not so great. The algorithm I cooked up for my app is cpu intensive and took ~5 seconds to run in python on my local desktop. That's suboptimal for something I want to do on demand from an API on the cloud, where the computing resources are going to much more limited. I decided to try my hand at rewriting my python algorithm in C# (dotnet core) and Golang.

I've done a lot of programming in C# in the past, but haven't used it recently. I'm not very familiar with dotnet core, but recent performance numbers I've seen seem very promising. As for Golang, I've used it a bit recently so I have a little bit of familiarity, but definitely not in depth knowledge. I decided to use the Echo framework as that seemed to relatively speedy and simple enough to work with. I did some googling around for other frameworks, but I didn't encounter any major issues in Echo that made me want to try another framework. I've seen a large number of comments suggesting to not use a framework at all in Golang, but reimplementing a number of simple things like routing, automatic JSON handling, middleware, etc does not seem to be very valuable to me.

For the sake of this post, I made a microbenchmark with similar characteristics to my actual algorithm. It involves involves reading a JSON request, looping on the data a number of times and using random numbers to make some decisions about the data before spitting out a JSON response. Here's the repo with the benchmark code. Some random things I learned/relearned while doing these benchmarks include:

My goal is to run a docker image on GCP's Cloud Run. Cloud Run has the nice feature of scaling to zero so it won't cost me anything if there's no usage. But first I wanted to test it locally. My desktop PC is going to have way better specs than the VMs I would get on a cloud provider, but it's a good point of reference. I used Apachebench and ran following command 3 times: 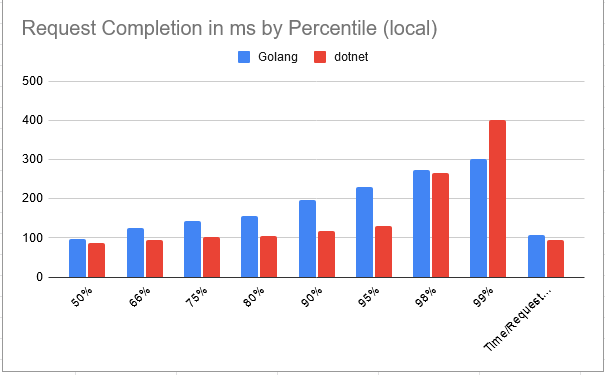 It looks like Golang loses to dotnet by a little bit (12%) on average for request/second. It also doesn't do great in general until we get to the extremely high latency moments (maybe this is due to some GC in dotnet)

Of course, I want to see the performance on the cloud too. So I booted up a cloud run service with the default settings (256MiB, 1vCPU, 80 request/container). I also tried bumping up the vCPU count to 2 as well as bumping up the using 2vCPUs + 512MiB. Here are my results: 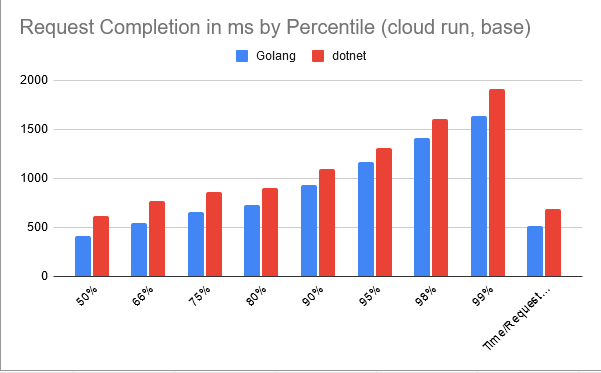 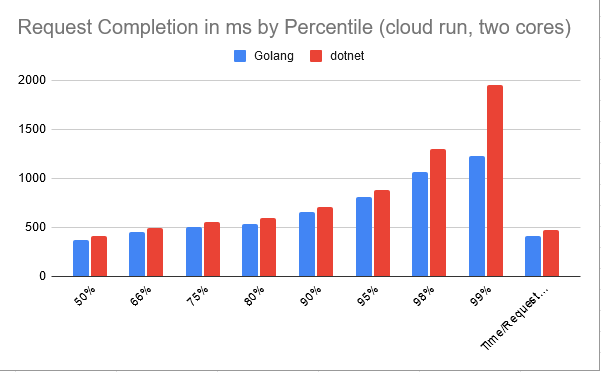 Again Golang beats dotnet at the 99%-tile (maybe this is GC or cold start?). Surprisingly, unlike locally, Golang does better across the board especially on the smallest machine type where the average of 511ms is 33% faster than dotnet's 681ms average. Golang's performance advantage decreases as the resources increase to the point where with double mem + double cores they are basically the same on average. Ideally, I want to be able to use the lowest spec machines possible to reduce any costs so superior performance on those minimal machines is quite attractive.

That was a nice exercise, but here are some numbers from my actual algorithm running on the base specs available on cloud run. 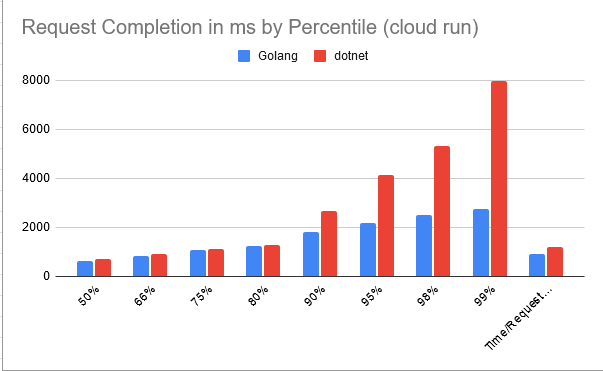 The same kind of trends continue with the dotnet version being marginally worse on the 50%-tile response times and much worse at 99%-tile response times. Golang was 35% faster on average than dotnet. I didn't measure memory usage on the cloud, but just vaguely looking at Task Manager while my program was executing indicate that Golang was using 20mb or so of memory vs 200mb of memory from dotnet. That's also quite impressive.

Caveat: Just my own measurements. I'm aware averaging percentiles isn't great, but at least it's easy.

Any error corrections or comments can be made by sending me a pull request.